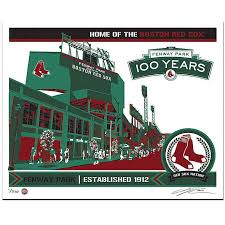 Now I want to tell all you HUMANS who read this….that Bone Daddy will probably never forgive me for writing about this subject….cuz he hates the Red Sox….as his Yankees are their arch rivals….and I’m here to tell you that they have been arch rivals since today’s subject story first opened her gates…. Fenway  Park ….the home of the Boston Red Sox….and on this day of celebration for being the 1st MLB ballpark to turn 100 year old…..for on this day of April 20, 2012 was a day of celebration when the fans 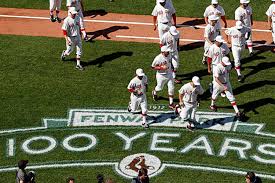 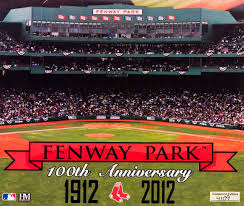 get to see all the Red Sox players from the past who are all getting older….but Fenway looks better than ever….and although Bone Daddy probably won’t give me any bones for a week after he reads this post, however ….on the other paw….”I’ve kinda always been one to beg forgiveness instead of ask for permission”. This video that is below provides a wonderful walk down memory lane….and for any baseball fan who ever saw a game at Fenway Park….saw exactly what the camera in this video saw…. for this was a ballpark of unique character and dimensions…..which captures the lure of such a great sports cathedral.  In my humble lil ole Chiweenie Sportsphile’s opinion….it is my sincere hope and desire that Fenway Park remains in the game of baseball for another century….as we only have a mere 92 years to go to reach that goal.

MLB – 1912 To Present – Special – Welcome To Fenway Park: A Walk Down Memory Lane

It was interesting while watching Bone Daddy’s honest emotional responses throughout the ceremony surrounding this historic event celebrating Boston’s Fenway Park 100th Birthday….and seeing the tears run down his face….followed by deep seated happy OOOOOHHHH’s coming from his gut as he watched the ceremony.  Since I know the big guy so well….coupled with the fact that all dogs have a basic undergraduate degree in HUMAN psychology….of which we Chiweenie’s are the some of the best at understanding the traits that are specifically unique in HUMANS….cuz we dogs specialize in unique.  I know that those emotions BD honestly displayed came from memories that surfaced from within him of the days when Los Tres Hermanos (Lil Wally, Bone Daddy and Runt) and Pops (three boys Dad) had shared that came from the joy of loving….playing…. watching…. and being a fan of baseball…..and even though the event was a tribute to home field of his arch rivals….it was the love of times spent doing baseball things that brought out emotions sincere.  So, here’s my salute to Fenway Park….you stand alone at the top on this day in year 2012 as MLB’s 1st centurion stadium. 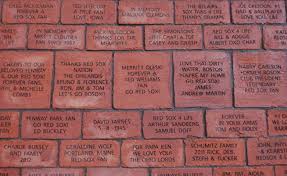 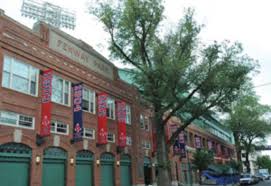 Oh yeah….I almost forgot that since BD hates the Red Sox….I decided to put lots of photos within this story about Fenway Park….along with a plethora of Red Sox videos from our collection …. as I feel compelled to piss him off as much as possible…. while pleasing as many of Red Sox Nation who reads this tribute to their home park….but make no mistake….if any of them were here right now….I promise I would bite each and every one of them ”cuz I just love dang Red Sox heals and ankles!!!  Can you say devilish bitch?  However, the fact remains that we have some really good Boston Red Sox video clips in our library here at ImaSportsphile….so in honor of the 100 year celebration at Fenway Park….I am posting this video of NBC Sports Bob Costas going to Boston’s legendary Cheers Bar to interview ex-Red Sox pitcher Sam Malone and his staff prior to Game 1 of the 1986 World Series between the Boston Red Sox verses the New York Mets.

It was April 20, 2012 and I had spent the afternoon sitting next to BD as he watched the pregame ceremonies for the 1st meeting between his beloved New York Yankees verses his arch rival Boston Red Sox on opening day of the 2012 MLB season….when one hour before the game started, MLB Network covered the 100th birthday celebration of Boston’s Fenway Park….which had opened its doors for the first time exactly 100 years ago on April 20, 1912….for the game between the Boston Red Sox and the New York Highlanders….who became the New York Yankees the following year in 1913. 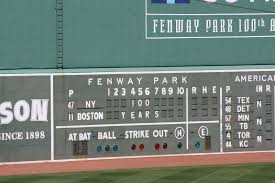 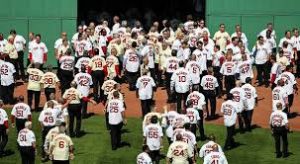 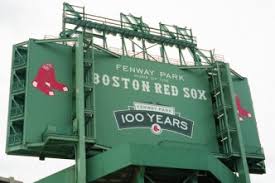 When Fenway Park was built….it was specifically designed to fit into a confined property in the middle of town….so they built the stadium to fit the unique dimensions of the property….and what resulted was a ballpark that has many unique nooks and crannies that are not found at other ballparks….so changing Fenway would be like straightening the leaning Tower of Pizza….as this was a place where the wall in left field masquerades as another player for the Red Sox….as the famous 37 ft. high Green Monster looms largely during dang near every game played in this fabled park….when it robs many visiting players of many home runs…..while providing a significant plus to the home team Red Sox….whose outfielders in left and center field know to play the balls that kareem off its forever looming wall.

During this continuing saga of celebrating Fenway Park’s hosting of the heated rivalry known for a century now as The Yankees vs. The Red Sox….the part that Bone Daddy really enjoyed were the historical facts surrounding the whole day….which were really pretty cool….as it makes me think about stories….and pictures….and videos that I can use to show how life was then….and how it is now….should be interesting….anyway  here are the facts of the day as follows:

In the following video, which is an excerpt from a 1985 Stroh’s Beer Circle of Sports program hosted by actor Robert Conrad….wherein he pays tribute to the Boston Red Sox home field at Fenway Park…..and the iconic cathedral which has now seen 108 years of Red Sox baseball.

The 100 year celebration at Fenway kicked off with an introductory procession of every living player (well almost everyone) who had ever donned a Red Sox uniform….no matter how long they wore that uniform….as each prior player came one by one out from the left field Green Monster wall….right next to the famous hand operated scoreboard where “Manny being Manny” darted into during a pitching change at Fenway to drain his lilly….getting some relief of his own while his relief pitcher warmed up.  Now isn’t it just like a dog to remember that little fact in the history of this stadium.

What Bone Daddy really liked about the procession of prior players was that none of the players were introduced by name….as they simply walked out from under the Green Monster….and walked to the position that they played….but the minute each unnamed player came out from the wall….Red Sox Nation knew exactly who that player was….no matter how old that player might be….for there was Carl Yastrzemski , Bobby Doerr, Johnny Pesky (we dogs appreciate Johnny Pesky cuz we like all folks that provide us with a pole for a rest stop….especially one that will be there for 100 years….and at the ballpark for that matter.   Do they let dogs into Fenway?), Frankk Malsone, Tony Petrocelli, Jim Lonborg, Bill Buckner, Jim Rice, Luis Tiant, Oil Can Boyd, Carlton Fisk, Nomar Garciapara, Pedro Martinez, Jose Conseco, Dwight Evans, Bernie Carbo, Dennis Eckersly, Mo Vaughn, Mike Lowell….and Spaceman Lee (who came out in a cowboy hat on his head and a bat in his hand)…..and that is why I just had to post this video below about Bill “Spaceman” Lee.

When recognizing all of those greats….it was Kevin Millar that got one of the largest ovations….but the two standing ovations were reserved for Carl Yazstremski and Tito Francona….as the history of Yaz is well documented as one of the three greatest Red Sox outfielders…..with Ted Williams, Jim Rice and Carl Yastrzemski….while Terry Francona is the only Red Sox manager who won two World Series…..but had gotten fired at the end of his last season for running “too loose of a ship”.  So, tell me something….cuz this lil ole Chiweenie Sportsphile doesn’t understand how you run a loose ship and have two rings to show for it?….for to even to a dog….that doesn’t make any sense. 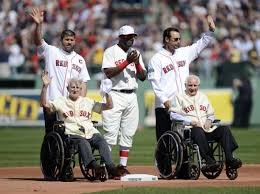 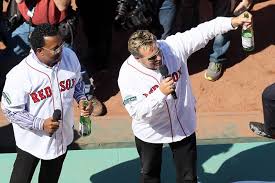 What made this procession of past players special to BD was that every player wore their jersey from the era that they played….so when Bone Daddy saw the players from the 50’s and 60’s….it really brought back memories of happy days gone by….but never forgotten.  Let me just say this….”the players have gotten old…. but Fenway looks better than ever”.  And just a note here on the  players ….it was just a short 3 months later that Fenway Park and Red Sox Nation lost one of their most beloved as Johnny Pesky passed away….and we dogs lost the only player to have a dog stop named after him….”Pesky’s Pole”.

My favorite part of the ceremonies was a wonderful short video done by MLB Network….cuz remember that dogs are very visual beings….but in my small brained opinion….it really caught the essence of the game for which the stadium was built….and in simple prose narrated by a 100 year old lifelong Red Sox fan….who was born in Boston a mere 6 days before Fenway Park opened.  The piece was called “This Is Our Game” narrated by Paul Hogan….and it went like this:

THIS IS THE LAND OF HARD WORK

THE LAND OF OPEN SPACES

THIS IS THE LAND OF BASEBALL

IT IS OUR GAME OF INCHES

THAT COVERS MILES AND SPANS GENERATIONS

SO TAKE US OUT TO THE BALLGAME

I don’t know whether any of you folks were as moved by the MLB piece “This Is Our Game” as Bone Daddy was when we watched this program together….as he asked me to replay the short piece over several times….while it brought a tear to his eye each time that he watched it…..as it is my opinion that the simplicity and accuracy of the subject matter is truly one of those things that causes a “swelling of emotions” to rise from within the very depths of his soul…..as it reminds him of a fond place and time spent with his Dad and his brothers out on the plains of West Texas…..and the truth be known, you just never no what image or verse will spark those memories which are most cherished.

Also….I just have to make a point about Ali….now folks here was a HUMAN who in his prime was superior in his sport at a young very age….when he chose to place his faith in Islam….was stripped of his title in his  prime…. was incarcerated for refusing to go into military service through standing up for his faith….regaining his the Heavyweight Championship Title twice after three (3) of his most dominant years of his career were taken away from him….and finally being stricken with Parkinson’s disease….while becoming the most recognizable HUMAN demographically on the Earth…..and he NEVER uttered one mean or bad word about the government or country that took his rights and freedom as an American. 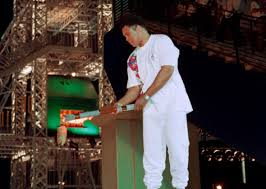 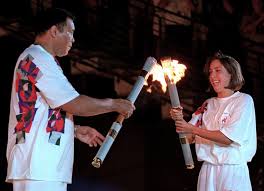 Rather, here was a HUMAN who instead chose to respect and honor his country….focusing on the country’s long suits rather than it’s shortcomings….and even after his Parkinson’s had become so amplified that it he no longer could control the body that have given him such overt confidence and beauty……as he has continued to answer every call that his country made….albeit lighting the flame at the Olympics or delivering the 1st pitch at the 100th celebration of his country’s national pastime.

L E’s Stories “A 5 Tool Player On The Field…And A 5 Star Human Being Off The Field” – Tribute To HOF Legend Roberto Clemente
January 12, 2021