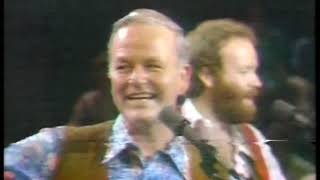 During the mid-to-late 1970’s, Austin, Texas was blessed to have two country and Texas swing bands led by fiddle player extraordinaire Johnny Gimble…..The Bosque Bandits and The Texas Swing Pioneers….. who not only performed on Austin City Limits…..but also played often at live music venues around the World Live Music Capitol….as both bands were highly regarded due to the fact that their leader, Johnny Gimble, was such a beloved musician and favorite son in and around Austin during this time.

In this video seen herewith….Johnny Gimble and the Bosque Bandits….perform one of their most often requested tunes….Get Off Its The End Of The Line….cuz it tells the story of a lover who had finally had enough of their “significant other’s” shenanigans….as the words of the song basically tells that person to “hit the road, Jack”….and don’t you come back no more in no uncertain terms….and that is why this song was so often requested. The simple truth is that nobody does the song quite like Johnny Gimble and The Bosque Bandits….and that is why we are so delighted to have this video seen herewith…..as it is just another “nugget of gold” in our treasure chest of vintage memories here at ImaSportsphile.

L E’s Stories – “A Chimney Sweep’s Lucky As Lucky Can Be” – Salute To Dick Van Dyke: A Comedian And Entertainer Of The Highest Order
November 24, 2020

L E’s Stories – “The Doaker: He Was Golden As Golden Gets” – The Story Of Legendary Running Back Doak Walker
November 17, 2020