The man who ran 19 steps at the start and 13 steps between hurdles….that dominated the men’s 400 m hurdles race from 1977 until this date of August 5, 1984….cuz that’s when USA Edwin Moses became an American sports legend of the highest order.  Here was a man who had won gold at the 1976 Montreal Olympics setting the existing Olympic Record of 47:63….a record that was still standing when he took the track on this day in 1984.

Lane assignments for the start of the men’s 400 m hurdles finals were as follows:  Lane 1 – USA Tranell Hawkins (Angelo St University)….Lane 2 – NGR Henry Amike (Missouri University)…. Lane 3 SWE Sven Nylander (SMU)….Lane 4 – USA Danny Harris (who had just taken up the hurdles 7 months prior)….Lane 5 – FGR Harald Schmid….Lane 6 – USA Edwin Moses….Lane 7 – SEN Amado Dia Ba….Lane 8 – BEL Michel Zimmerman…..as the field had a definite American feel to it since 5 of the 8 competitors in the final had trained in the US.

The guy right next to Moses in Lane 5….Harald Schmid….was the last man to beat Edwin Moses in this race way back in 1977….as Moses had amassed a consecutive win streak of 89 finals and 104 races….and the fact was that Schmid had been his arch rival in many of those races since he and beaten Moses.  Germany’s Harald Schmid was one of the best 400 metres hurdles runners in the world during his career….as his duels with Edwin Moses during the late 1970’s and early 1980’s are unforgettable….as every legendary athlete needs a really great one to push them to excellence….and that’s what Schmid did for Moses….as Moses would say…”I would wake up at the morning, and in California we’re about nine hours ahead of Germany. I’d say to myself, ‘Harald has probably finished his workout by now, I need to get busy!’ Guys like him were my motivation.”

It is truly rare when one who loves to watch sports at live venues….you know, a Sportsphile like Bone Daddy…..who has the opportunity to see two different athletes in two different disciplines…..perform feats of athleticism that becomes over night legends….which will be spoken of in reverence and awe in the annals of sports conversations for all future generations that follow….for that is what Bone Daddy got to do at the Los Angeles Coliseum on August 5, 1984…..when he saw, without question, the greatest men’s 400 m track runner of all time….perform on the greatest stage of all….the Olympic Games….and outshine every other athlete in the stadium on this historic day….and then just a short moment in time thereafter…..when an American girl emerged from the tunnel at The Coliseum…..when a roar erupted from the crowd that continued at a feverish pitch until USA Joan Benoit completed her final lap of the 1st ever women’s marathon in an Olympic competition.  As Bone Daddy puts it….”I never have….and I think I never will again….experience two more orgasmic moments of excitement within such a short time frame….as the experience of being there when the throng of sports fans from all over the world….joined together in a tumultuous expression of joy…..as Edwin Moses and Joan Benoit crossed the finish line at the 1984 Los Angeles Olympics.” 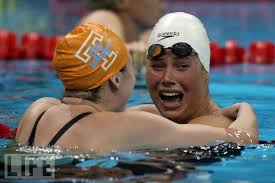