ABOUT MY 1984 LOS ANGELES SUMMER OLYMPICS COLLECTION FOR SALE

This letter acknowledging that the tickets were on their way to my residence in Austin, Texas was the start of a one of a kind “Journey of Olympic Proportions”…..in which three sports enthusiasts from Austin, Texas would go on a Magic Carpet Ride to the Left Coast…..and return home after 17 days at the Los Angeles Olympics with an Olympic fan record that can NEVER be broken….ONLY TIED….as Los Tres Amigos from Austin saw a live event in every sport that was competed (21 sports and 2 exhibition sports) at the 1984 Los Angeles Games. 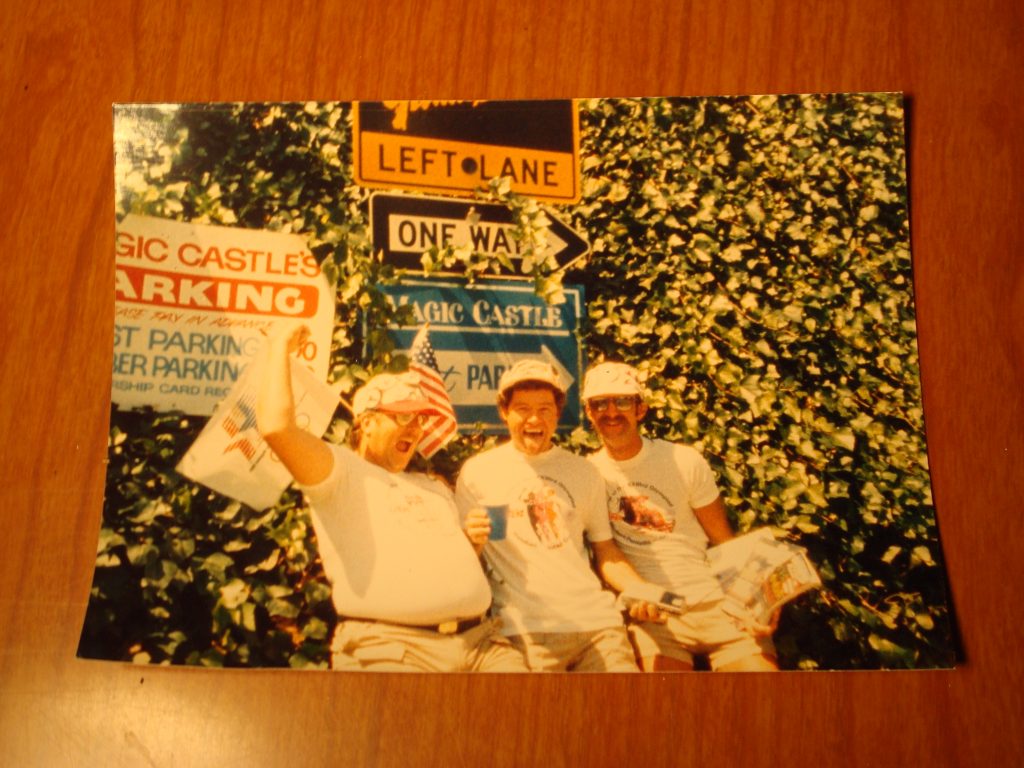 Los Tres Amigos arrived in Los Angeles on the night of July 28th….which was the day of the Opening Ceremonies for the Games of the XXIII Olympiad (which we didn’t have tickets for)…..so, after picking up our rent car at LAX airport, we then went directly to The Magic Castle, which was the home of The Academy of Magical Arts since 1963….as we had hotel reservations at the nearly adjoining Magic Castle Hotel.  Los Tres Amigos were able to gain access to this magical place through their good friend, Turk Pipkin, who was an Austin local street magician, juggler, sidewalk artist and movie maker of his made for TV film of “Bill: On His Own”…..in which he played a starring role as the juggler in the film.  Turk Pipkin was also a member of The Academy of Magical Arts…..which was better known as The Magic Castle in Hollywood, California….as Turk pulled off one of his all-time best tricks when he got Los Tres Amigo access to the clubhouse and hotel…..where the trio stayed throughout their historic Olympic Magic Carpet Ride into the annals of the Olympic fandom lore throughout the history of the Olympic Games.  The truth be known, Los Tres Amigos home away from home was the magicians clubhouse known as The Magic Castle…..where they would gather every night after each day’s Olympic outing….just to “wet their whistles” while reviewing the outstanding athletic endeavors that they seen during their day’s journeys….and to map out their next day’s schedule in order to accomplish their mission to see a live event in every sport competed at the 1984 Los Angeles Olympics.

The first day of Olympic events that Los Tres Amigos had tickets for took place at the McDonald’s Olympic Swim Stadium….where they spent the entire day watching heats and finals in the Women’s 400m Individual Medley, in which the gold medal was won by USA Tracy Caulkins….the Women’s 100m freestyle, where USA’s Nancy Hogshead and Carrie Steinseiffer shared the gold medal with matching winning times…..the Men’s 100m Breaststroke, won by USA Steve Lundquist…..and the Men’s 200m Freestyle, which was won in World Record time by West Germany’s Michael Gross, with USA Mike Heath taking the silver medal.  So, by the end of their 1st day of Olympic competition, Los Tres Amigos were “jazzed to the max” with the euphoria of having witnessed the USA win three gold medals and one silver medal.  So, over drinks at The Magic Castle that night, that is when they decided to take on a mission from the Olympic gods, to attend a live event in the remaining 22 sports that were being competed at the 1984 LA Games….and having only 13 days of competition left….as their quest would require tremendous planning and logistics….whereby they not only had to get to Olympic venues from Long Beach in the South to Lake Casitas in the North…..which was a distance of 100 miles along one of the most populated coastlines in the world….where every driver is dealing with world renowned Los Angeles freeway traffic…..but they also had to count on their good fortune to find “ticket scalpers” at 15 of the remaining events (while still having tickets to 7 of the original pre-ordered events).  Just FYI, it was also illegal to “scalp tickets” at the Games of the XXIIIrd Olympiad.  Evidence of the challenge of the actual logistics of trying to accomplish this “never before tried endeavor” of attending a live event in every sport competed the summer Olympics (23 live sports) are the images of the daily calendar of events and their venues below….which provide a semblance of the planning that it took by Los Tres Amigos to accomplish their mission. 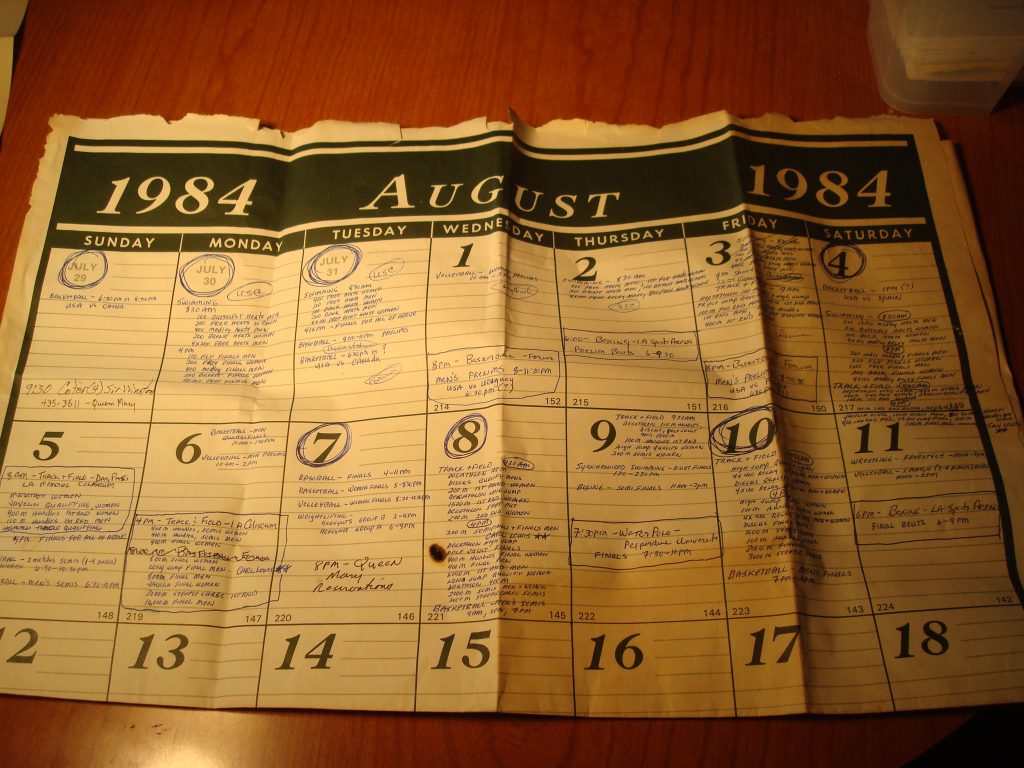 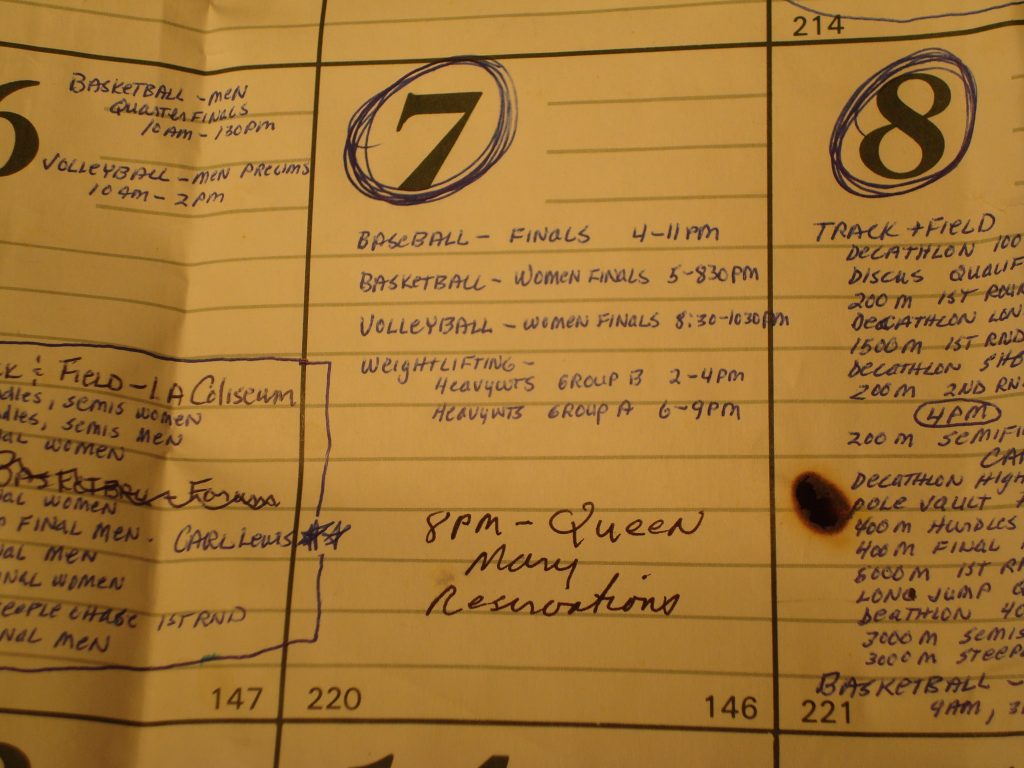 Suffice to say, the mission was indeed accomplished…..and along the way….a tremendous collection of 1984 Los Angeles Olympic Games memorabilia and collectibles were acquired….to the tune of around 300+/- pieces which is all for sale in it’s entirety in this sales package.

The following is a sampling of the pieces of memorabilia and collectibles that are found in this collection.  There are not any prices attached to each picture, because the value is in this entire expansive collection and the Olympic fan record….which can only be TIED…..NEVER BROKEN….that creates the  cumulative value….for there is not another collection quite like this one that is available in the world today…..some 38 years later.  In addition to all of the different pieces of this 1984 Los Angeles Olympics collection, I also have a copy of the entire Games of the XXIIIrd Olympiad television coverage by ABC Sports that accompanies this collection when purchased.  Memorabilia as follows:

Banners and Flags from the 1984 Los Angeles Summer Olympics

There are no reviews yet.