In August 1981, figure skaing coach Vladimir Zaharov paired the 11-year-old Katerina Gordeeva with the 15-year-old Sergei Grinkov…..when because Grinkov frequently missed practice….Coach Zaharov eventually insisted that Gordeeva pair with someone else….but she refused. Instead, the pair changed coaches….as Gordeeva and Grinkov won the 1985 World Junior Figure Skating Championships in Colorado Springs, Colorado…..and the following year they won the first of their four World Figure Skating Championships….as they are one of the few pair teams to win back-to-back junior and senior world championship titles. They successfully defended their world title in 1987….then in November 1987, Grinkov caught a blade on the ice during a practice session and dropped Gordeeva on her forehead…..whereby she was hospitalized for a time….but they were still able to compete in and win a gold medal at the 1988 Winter Olympics…. which began the following February in Calgary, Alberta, Canada….and they remain the youngest pairs team ever to win Olympic gold. After a fall in their long program, they took silver at the World Championships in 1988….but reclaimed the title in 1989 and 1990. They turned professional in the fall 1990, winning their first World Professional Championship in 1991. They also won that title in 1992 and 1994.

Gordeeva and Grinkov won almost every competition they entered…..evidenced by the fact that in the 31 competitions whose results are known at the senior and professional levels….they finished first 24 times….and never lower than second place from the time they won their first senior world title. They are one of the few pair teams in history to successfully complete a quadruple twist lift in international competition….when they landed the difficult element with ease at the 1987 World Championships. They also completed the element at the 1987 European Championships, but due to a problem with Grinkov’s boot strap and a misunderstanding about the rules….as the referee signaled them to stop, going so far as to turn off their music, but they continued skating….and they were disqualified from that event.  They stopped performing the quad twist because it made no significant improvement to their marks….which made the added physical stress unnecessary.  Katerina writes in her book, “My Sergei: A Love Story,” that this element raised her heart rate and blood pressure to levels that alarmed the Soviet team’s doctors. “That summer we had learned a very difficult move called the quadruple split twist,” she wrote, “in which Sergei threw me in the air, I did a split, then closed my legs and made four turns before he caught me. We were the only pair to do this quadruple element, and it was very exhausting—more exhausting than difficult, really. Soviet doctors had measured my pulse rate as exceeding two hundred beats per minute when I did it.”  So, how cool is it that we have this incredible figure skating pair in our library!?! 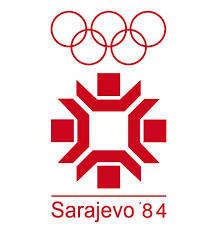 Olympics – 1984 Sarajevo – ABC Hilites Of The Games With Jim McKay