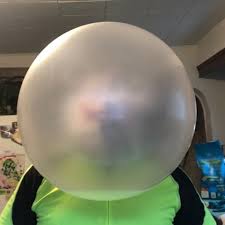 Before I get started on today’s story…..I want to remind our readers / viewers that in our L E’s Stories Section here at ImaSportsphile….I will always share videos that I particularly like as some of my favorites out of the 5500 videos currently posted on our webpage here in June 2020…..as I am very fond of these in this story herewith.

Almost every Friday after school during the Spring of 1957….all the cool dudes from Sam Houston Elementary Pre-School Tag-Up Baseball League….especially TnT, Peanut, Animal, Hoss, Bear, Hook & Bone Daddy….would jump on their bicycles and haul ass from school to Hanks Neighborhood Grocery…..which was on the other side across the street from Midland Memorial Stadium….while the stadium and Sam Houston Elementary School playground abutted each other….so, the bike ride took maybe 2 minutes. 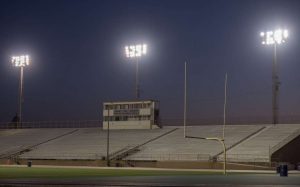 Midland Memorial Stadium was where the Midland High Bulldogs (white school) and the Carver High Hornets (black school) played football and baseball…..as these were the only two high schools in Midland at the time.  Bone Daddy and his family lived on Louisiana Street in Midland, Texas…. and right across the street from Sam Houston Elementary. So Hanks Grocery was on the north side of the Memorial Stadium complex…..and Sam Houston Elementary was on the South side of the complex….and Bone Daddy and his brothers   (blood and all other) would jump the barbed-wire chain link fence on many many occasions throughout the 18 years that they lived across from the stadium.  The truth be known, I cannot even begin to tell you how many hours Bone Daddy spent on the playground at Sam Houston Elementary playing pick-up sandlot games of baseball…. or shooting hoops and playing one on one or three on three on the basketball court….or for that matter practicing punting the football and playing “tag and tackle football”…..from the minute school ended until it was dinner time at his house across the street.

The purpose of these “haul ass on your bike journey” around the perimeter of the whole complex….was to buy as many packs of baseball cards as each boy could afford….based on how much of their lunch money that each had been able to save during the week….which was added to each one’s allowance….to define what each had to spend on this week’s purchase of baseball cards and bubblegum packs.  If memory serves BD correct….he thinks the baseball cards originally came in foil packs that had 8 player cards and 1 x large (2″ x 4″) stick of bubble gum….all of which you could buy for a nickel (5 cents) per pack.  So, with 50 cents, Bone Daddy could get 80 MLB player baseball cards…..along with 10 huge sticks of bubble gum….whereby just two of these monsters could be chewed and lathered into perfect “bubble blowing consistency” for creating those majestic giant bubbles.

That 2″ by 4″ slab of bubble gum would be the 1st thing each of those boys would remove from their card pack…  with every full sheet of gum from all the card packs purchased ending up in each of the cool dudes mouths…..only to ignite a daily competition of who could blow the biggest bubble while avoiding having a big bubble punctured before its time….only to leave sticky bubble gum attached to the cool dudes noses….eyebrows….and sometime in their hair.

So, from this lil ole Chiweenie’s perspective, the bubble gum was seemingly the primary objective of the purchase of the day….with the baseball cards really being an important by-product….but one for another time…..kinda like the cherry on top of a banana split.  Once a more than sufficient amount of bubble gum had reached the point of blowing bubbles….as any bubble blower worth his weight in air knows very well….cu it is an “art of science” in knowing how to blow a not big but HUGE bubble….and all the guys in this bike gang knew how to blow a HUGE bubble…..shoot….if one of the bubbles these boys could blow were to explode behind me!?!….it would probably have lifted the WEE right out of this lil ole Chiweenie…..cuz I am talking about completely off the ground with ONLY a puddle left behind.

It was just plain fun and exciting to open a new pack of baseballs cards…..  first to see what favorite popular player cards might be inside……which always led to discussions about whose card they each hoped they would find in their next newest pack….but the real fun that was had almost every Friday after school came from those giant sticks of bubble gum….of which each  dude had learned how to blow huge bubbles when the right amount of bubblegum (we’re talkin full mouth here) was chewed to the perfect consistency. 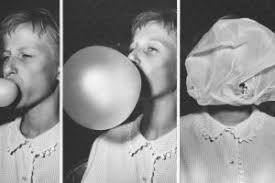 Evolution Of A Bubble Gum Bubble

However….once all the bubble gum had been chewed down….and “the largest bubble blowing competition”  had once again come to the day’s end….whereby at least one of the dudes would head home having “bubble blowers eyebrows and hair”….that is when the “cool dudes” from Sam Houston Elementary would turn their attentions to their newly acquired baseball cards…. when Bone Daddy was looking for ANYTHING YANKEE….and really nothing else….except for maybe  another superstar card like Willie Mays, Hank Aaron, Ted Williams, Stan Musial, Whitey Ford, Yogi Berra etc….cuz with those cards….he could use them as good trade material for another Yankee’s card that he wanted and didn’t have.  So, unless he had non-Yankee superstars in his pack….he’d sometimes trade 5 or 6 cards for just one Yankee card before he ever went home on any given Friday evening.  Without any question in my mind…the buying….collecting….and trading for his Yankee cards not only became the genesis of BD’s Yankee collection….but it also provided the breeding ground for the “horse trading talents”  that BD has been able to master over the years.

When BD would get home at night with his newest Yankee cards….he’d spend hours reading and memorizing the “stats” on the back of each of his team’s player cards….always reviewing the whole card….cuz they are truly and  simply….works of art in such a small space.  So my big guy is 9 years old and already learning the fine and creative art of trading something that he had for something that he wanted…..what a kid… just a Sportsphile in the making, and as of today May 29, 2020….our Bone Daddy is a Sportsphile master.

I’ve got to tell you something from a dog’s perspective…. those old baseball card’s….the ones from the 1950’s & 1960’s specifically…. were works of art encompassing libraries of statistics….cartoons ….humor …. and pictorial stories…all on a small cardboard card that would fit in any HUMAN’S wallet …..and when attached to the spokes of their bicycle tires….it also made a really cool sound while pedaling down the road….almost like a small motorcycle, as  BD never put any Yankee card on “the spokes”…..albeit more than a few Red Sox were known to be ripped to shreds by “the spokes” of BD’s 26” Schwinn bicycle. 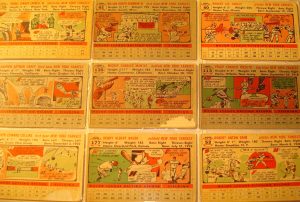 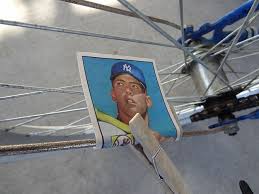 In the mid 1950’s….Major League Baseball was definitely more popular than football in America…. and in West Texas….it was at least equal in popularity to football….a place where football is and has always been truly the King…. the long running TV program “Friday Night Lights” being proof of my statement. Baseball was known as our national pastime….and if you were a 4th grader and an aspiring athlete….Little League baseball was what every 4th grade boy wanted to play.

As the school year was coming to an end in the spring of 1957….summer was coming on…..with the Central Little League Baseball Tryouts being just a couple of weeks away.  Each day leading up to tryouts for a month or so before….all the Little League age boys….mostly 5th & 6th graders and a few 4th graders who were really good for their age….would show up at Sam Houston Elementary School playground an hour before classes started every morning….tagging up for a pick up baseball game on the school playground….that would serve as Spring Training for all prospective Central Little League players. Since BD lived across the street from Sam Houston Elementary School playground….where the baseball field and backstop sat at the far end of the school property….right next to and on the South side of Midland Memorial Stadium.

It was Saturday, April 14, 1957 with Central Little League Tryouts at 9am at McCall Park….with the team draft beginning at 2pm….and that is when BD’s boyhood friend and catcher George W. Bush…..was the 1st player taken by the Cubs…..while three of the “cool dudes” from Sam Houston Elememtary with  TNT….third baseman HOOK….and pitcher/outfielder Bone Daddy were all selected by the Braves….then first baseman BEAR….outfielder ANIMAL….and pitcher/second baseman HOSS were selected by the Cardinals….while Peanut and Jackalope were going to be playing for the Bankers….as all the preschool tag-up league were chosen by a Central Little League team for the 1957 summer season…. with Opening Day being just two weeks away….cuz all the players who had been selected by the teams in the Central Little League were chomping at the bit for the season to begin.  In honor of the Central Little League Season of 1957….I am sharing this video highlights recap of the 1957 Little League World Series Champion from Monterrey Mexico…..who were known as “Los Pequenos Gigantes”…..which is a very special video indeed…..cuz Monterrey’s P Angel Macias pitched a perfect game while striking out 18 batters in a row…..as Macias batted and pitched from either side….and played all nine positions in the field…..which is simply awesome.

In the title of this story….“Tag-Up Games / Baseball Cards / and Bubble Gum: Forging The Cornerstones Of Success”….while just considering friends of Bone Daddy who were participants during that particular season….which included the “cool dudes” from Sam Houston Elementary Preschool Tag-Up League with Hook going on to become CEO of Temple Inland Industries….as Hoss became a 10 yr. NFL player / successful large cattle rancher…..while Jackalope went on to become the CEO of UniCal Corporation, and eventually becoming a billionaire….with Peanuts becoming the Head of Yemen Operations for Hunt Oil Company…..along with Bear, who became the Head Of Golf Production at ABC Sports……then Animal became the General Counsel for Pennsoil Corporation…..after which TNT became the co-owner of Madison Square Garden, The Sports Place in Austin with Bone Daddy…..who became the original Sportsphile…..so, any way you cut the pie…..it can be said that tag-up games, baseball and bubblegum when a long way in defining the cornerstones of success in these guys lives. 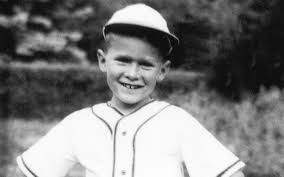 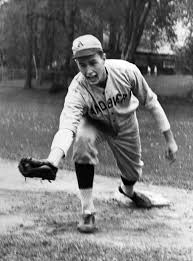