L E’s Stories – We’ve Done So Much With So Little….We Can Almost Do Anything Without Nuthin’

Bone Daddy, the original Sportsphile, has always said that“The true beauty of the coaching profession is the ability of a Coach who understands the power of teaching valuable life lessons to his players…..and not just how to win a game.”…..as this statement certainly applies to my story today.

Now don’t get me wrong here….I said that I like the core principles that they both embody….but that doesn’t mean I wouldn’t bite either one of them…cuz I would. Why you say?….cuz they are both just a little too full of themselves….but then again what real Sportsphile isn’t.

OK…so I would probably give both of them a good nip around their ankles….heck….I might even have to bring a lil blood with one of them….which totally depends on how cocky each of them are the day we meet…..you know….just to let them know whose boss….“What a devilish bitch”.

Anyway, I sat down to write this story because I just finished watching one of my favorite all time First Take shows….specifically the segment with guest debater Doug Williams….who was the first black quarterback to win the Super Bowl when he joined Steven A, Cari Champion and Skip at the debate desk. 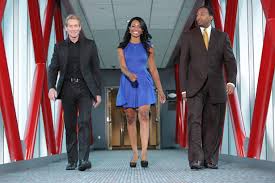 The question was asked of Williams by Steven A….“What does it feel like to be the first man of color to be the winning quarterback of a Super Bowl?”  William’s response was said in simple eloquence and was completely insightful….cuz it provided a significant amount of value as essential “life’s lessons” in a very short period of time….which is unusual for the majority of HUMANS….simply because of their determination to makes things more complicated than the circumstances tends to be.  In tribute to QB Doug Williams leading his Washington Redskins to the Championship of Super Bowl XXII….while receiving the Most Valuable Player Trophey in 1988….as world renowned trumpeter Herb Albert provides an awesome rendition of the Star Spangled Banner..

On this day, William’s responded to Steven A’s question by saying…..”There has not a day that has passed that I haven’t thought about that accomplishment and its impact on my race and my sport”.   He went on to say that he and James Harris….another black NFL quarterback at the time….who also played for Coach Eddie Robinson at Grambling University….had discussed and agreed often that their edge in football and in life had been Coach Eddie Robinson. 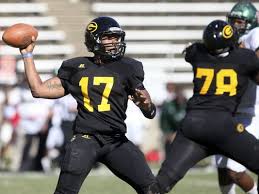 Coach had instilled in both of these men first of all that “No matter how tough it gets….it can only happen in America”….and then of even greater value….”We’ve done so much with so little….we can almost do anything without nothin”.

Man….that is so powerful….for Coach Robinson had cut to the chase in the simplest of manners….and passed on one of life’s greatest lessons for all HUMANS to read….listen…. and absorb these two simple phrases….”we’ve done so much with so little”….and followed by “we can almost do anything without nuthin”….cuz within the simplicity of these quotations lies the answer to so many of life’s most difficult questions….but in order to understand the depth of these simple words….each and every HUMAN who reads this….needs to take just 3 minutes and think about the message that Coach was trying to get across from the perspective as taught to all dogs by God Dog (God Almighty to my HUMAN friends)….which at the very least….obviously gave those two young black men such a distinct advantage in life.

No matter where or how this philosophy is applied throughout any HUMAN life….they can do almost anything without nuthin’….as long as they have the right attitude that they can do what they want to do.  I love that mentality…..along with the application of that simple philosophy…..as Bone Daddy so aptly puts it…..“it’s not about what you don’t have in life….it’s about what you do already have that truly matters in life.”

In this lil ole Chiweenie’s opinion…..after observing HUMANS for my 121 years on this Earth (dog years)….is that God gives each person inhabiting this planet a very special talent unique unto that specific person….and if that person is fortunate enough to identify that (those) talents….and they are willing to take the time necessary to learn to master their own gift of life from above….then they can achieve almost anything…..as the video I have chosen speaks directly to living proof that it isn’t what you don’t have…..but rather what you do have that counts in life….as we get too see how Eric Weihenmayer turned his blindness into his unique sight of the world….as he became the only climber to ever reach the summit of not only Mount Everest….but so much more with regards to kayaking the Colorado River, riding a bicycle and hang gliding off a mountain….as this video provides evidence of what can be done with so little. 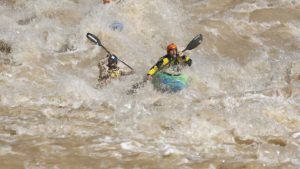 Founded within the understanding of the power that this statement affords to all HUMANS….no matter where or when it’s is applied….there lies everything that is needed for that individual to achieve whatever they might want to achieve….for it is not about what you don’t have…. it’s truly about what you do have….and what you are willing to do with what you do have that matters most while on this Earth……regardless of ones age.  I expand on this simple philosophy in a story that I wrote about how growing up under West Texas skies at night that gives some additional insight into the power  that this simple philosophy made a Sportsphile out of Bone Daddy and me.

It turns out that in 1978….when Skip Bayless was a beat writer for the Los Angeles Times….he was called into his boss’s office and told that he was going to Grambling University in Louisiana to cover a young black quarterback who was graduating from a black  university in the South….who was projected to be a 1st round draft choice in the upcoming NFL draft.  When Bayless arrived at Grambling State University….the 1st person he met was Coach Eddie Robinson….whom Skip described as a really nice genuinely caring man….who asked Skip if he would address his team….to which Skip commented on how attentive each player on the team was….to a scrawny 21 year old beat writer from Los Angeles.  Skip said that the attention and respect that each player of Coach Robinson’s team was totally because of the respect that each player had for Coach. 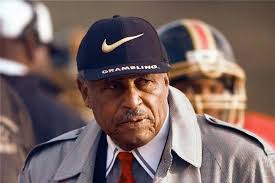 Cari Champion, First Take’s more than qualified to sit between these two dynamic forces known as Skip and Steven A….and be an awesome moderator for their daily debates.

However, of most importance to Cari’s lil ole YA YA Sister…. me  ….is how much I enjoy her wonderfully attractive and intelligent big time Diva attitude that she projects on screen….cuz it  takes one to know one.  Anyway, we’re both Sisters of Color…cuz I’m black too Baby (OK….with a little more grey than I like to admit).

On this particular day when fellow Diva Cari….as the moderator of the daily debate desk….states that Doug Williams is the Head Coach at Grambling University…and asks him whether he recruits athletes that could eventually end up in the NFL. Coach Williams replied….”I don’t recruit young men to go to the NFL….I recruit based on the absolute advantage that a black man in America has to get a college degree paid for them while playing football for Grambling University.  If a player that I coach wants to go to the NFL….and they have the talent to do so….their journey does not start in their senior year….it starts the day that student athlete gets to college.” 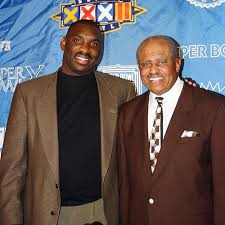 Steven A then asked Williams how he felt about how the black athlete conducts themselves today….to which Williams replied….”It is unfortunate….but in the NFL today….the players don’t have what we had….we would get up almost every day and go get each other to go to lunch.  We were a tight team on a daily basis….so, the demands created by all the money of today….have taken that away.  Now, cash comes and cash rules….and a lotta guys like what the NFL can do for them….but don’t think about what they can do for the NFL.”

As Doug Williams left the debate desk that day….Cari “You Go Girl” Champion showed Doug Williams that she was sincerely honored to have shared the time and space with Williams on this particular day….and that’s what I like most about Cari Champion….Diva or what….she has a pure love for the best of the best…. especially those who share hers and my common traits of a combination a of intelligence and good looks….and gals who love to take the reins in their own hands….not to mention that she just might be a Sportsphile to boot….and I like that…..but any way you cut the pie, Cari Champion could hold her own while sitting at the debate desk with two ego maniacs like Stephen A Smith and Skip Bayless.

After watching this program….this viewer was left with the opinion that without a doubt….Doug Williams is a leader of men…..which by the way is a truly common quality in every champion that I have observed on my journey to becoming a Sportsphile over the past 121 years.  Heck, you’ll find that in a great deal of my writings that I have many story lines that have to do with monumental events and victories in sports ….which only happened as a result of the actions of great leaders of men.  Sadly though….the changes that have been brought about into today’s professional sports picture are quite different from the days that Williams played is a reality that has become significant….and the cause and effect of these significant changes is because of one thing only….IT’S ALL ABOUT THE MONEY 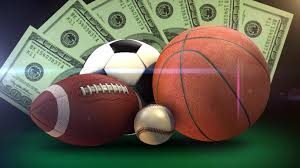 Money And Sports: A Match Made in Hell

….which has made what was then and what is now so very different….for as we enter the 2020 NFL season….the MONEY has gotten astronomical with quarterbacks  like Doug Williams getting $31,000,000 as a “franchised player” on NFL teams for one year. However, what the men from back in the day when Williams played have to teach is of great value to the ones of today….if they could only listen a little more than they talk….but that won’t happen cuz money has a way of closing ears and opening mouths…..as MONEY has taken the most humble of players to become the most egocentric of superstars in today’s game. 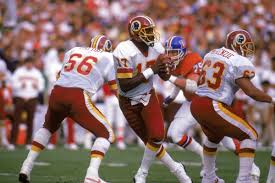 In the RGIII narrated program was an interview with Reverend Al Sharpton who reveals that the mindset that black America took from this historic event of the first black quarterback to win a Super Bowl Championship….was that if we can have a black man lead a team to the Super Bowl….then we can have a black man lead America as the President of the United States.  Further in the    Williams segment….Bob Ley interviewed African American Pulitzer Prize Winner Coleman King of the Washington Post….who was asked by Ley about making a comparison of RGIII to Doug Williams….whose response was that their most common shared quality was that they were both likable.  But my favorite part of the program was The Rev’s explanation of the essence of the moment at the end of William’s championship game….that was where winning QB Doug Williams and Coach Eddie Robinson were seen hugging and sobbing in each others arms….as Coach told his student….”It will be much later in your life before you realize the impact of what you accomplished today…I am so proud of you.”  All I can say is  “WE’VE DONE SO MUCH WITH SO LITTLE….WE CAN DO ALMOST ANYTHING WITH NUTHIN’”….and thank God Dog for HUMANS like Coach Robinson.

L E’s Stories – After Church On Sunday: Pops And The Boys Were Part Of Arnie’s Army – Tribute To Arnold Palmer
September 19, 2020